Ontario is Cracking Down on Careless and Distracted Driving 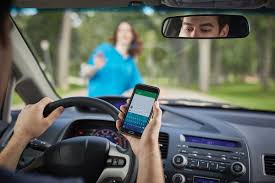 Ontario plans to crack down on careless and distracted driving with tough new rules and penalties that would help improve road safety and keep the most vulnerable road users – including pedestrians and cyclists – safe.

Minister of Transportation Steven Del Duca and Minister of Tourism, Culture and Sport Eleanor McMahon, were in Toronto today to announce the tough new road-safety measures. They were joined by Han Dong, MPP for Trinity-Spadina.

The province plans to introduce new legislation this fall that, if passed, would help protect pedestrians and cyclists and reduce the number of people killed or injured by impaired, distracted and dangerous drivers. The proposed measures include:

A new offence for careless driving causing death or bodily harm with penalties that include fines, licence suspension and imprisonment
Tougher penalties for distracted driving, such as using a cellphone while operating a vehicle, including higher fines, more demerit points, and license suspensions
Increased penalties for drivers who fail to yield for pedestrians and escalating fines for drivers who are convicted of multiple pedestrian-related offences within a five-year window
Expanding the use of rear flashing blue lights for enforcement and emergency vehicles.
In addition, the province is consulting on the use of cameras on school buses that capture the offence of illegally passing a school bus, so that this evidence can be admitted into court without a witness.

For 16 years in a row, Ontario’s roads have been ranked either first or second safest in North America, but more can still be done. These strong measures add to recently-announced tough new penalties for those who drive under the influence of drugs, including cannabis.

Keeping Ontario’s roads safe is part of our plan to create jobs, grow our economy and help people in their everyday lives.

Quick Facts
On average, one person is killed on Ontario’s roads every 17 hours. In 2014, pedestrians and cyclists made up approximately 25 per cent of Ontario’s road fatalities.
While drunk driving remains in the top-five killers on Ontario’s roads, the province’s most recent roadside survey found that drivers who tested positive for drugs were more than twice the number who tested positive for alcohol.
The proposed legislation builds on existing measures Ontario has introduced to improve road safety including tougher impaired, distracted and street racing laws.
In May Ontario passed legislation to protect the most vulnerable such as pedestrians and cyclists, by giving municipalities more tools to address speeding. These tools include the ability to set reduced default speed limits and use automated speed-enforcement systems on roads with speed limits below 80 km/h that are designated as community safety zones or in school zones.
In June 2015, Ontario passed legislation to toughen penalties for offences such as distracted driving.
The Ministry of Transportation hosted a road safety symposium in June with municipalities and many road safety partners to discuss a broad range of road safety concerns that helped shape the government’s proposed actions to help to save lives on Ontario’s roads.

Upon completing this reservation enquiry, you will receive:::

Your rental voucher to produce on arrival at the rental desk and a toll-free customer support number.